Mark exhibited many challenging and defiant behaviors throughout the school day. In addition, he would shut-down and not respond at all during some school transitions. This was particularly challenging when the class needed to leave for lunch and recess. Mark would just lay down, go completely limp, and completely tune out. The teacher, counselor and administrator could not get him to move. They all exhausted just about every tool and strategy.

The principal believed that this might be a behavior tied to early trauma that he experienced as a baby in a Russian orphanage. While researching more information about this, the principal discovered a condition called RAD (Reactive Attachment Disorder). It just so happened that a national expert on RAD was coming through town for a training. The principal bought a ticket.

After the training ended, the principal offered to help the presenter with her boxes out to her car. The principal asked if he could “pick her brain” about a student. After telling the expert all about Mark, his behaviors, and everything that had been attempted, the presenter said that she had a solution. The principal took out a pen to write down the expert’s advice. The expert told the principal to approach the student, look him in the eyes, and ask him a very important question. As the expert was sharing this wisdom, the principal was becoming more and more hopeful about a solution to implement the next day. The expert went on to tell him the important question, “ask Mark if he would buy a pickle for a nickel”. The principal looked at the expert as if she was crazy. He asked the expert, “that is the best advice that you have?” The principal was deflated, exhausted and upset by this answer. He was equally upset that it was 9 pm and that he still had an hour ride to get home.

On his ride home, the principal shared the expert’s wisdom with his wife. His wife laughed at this. When the principal arrived home, there was a jar of pickles on his nightstand with a note that read “take a pickle and leave a nickel”.

The next day the principal brought the jar of pickles with him to work. He figured that he could at least get a good laugh with his staff about the “great” advice that he received from the so-called expert.

Just like clockwork, the principal received a “911 call” on his walkie-talkie to room 15. When he arrived, there was Mark laying on the floor completely tuned out. The principal tried everything that he could think of and there was no response from Mark. Finally, he remembered the advice from the expert. The principal figured that it couldn’t hurt anything. He approached Mark, tried to make eye contact, and asked him, “would you buy a pickle for a nickel?” Mark sat up quickly and said, “what the (expletive) did you just ask me?” The principal was shocked that Mark responded and didn’t know quite how to respond (he also ignored the expletive). Mark then said, “that is the dumbest question I have ever heard. How can I possibly answer that? What kind of pickle are we talking about? If it is a big spicy pickle that is in the jar on a 7-11 counter, yeah, I’d buy that for a nickel. But if it is a really small one, no way, that’s a rip-off!”

The principal said nothing and just looked at Mark. Mark went on, “how did you know I like pickles? Now that you brought it up, I’d really like one. Where can I get a pickle?”. The principal told Mark that he knew exactly where there were some pickles. They went to the office and Mark ate several pickles like he had never eaten before.

While Mark was chomping away on the pickles, the principal started a conversation about why it was so important for Mark to communicate with and respond to staff and to let us know what is going on. In addition, why it is so unsafe to stay in a room by himself. Mark nodded along while wiping off pickle juice from his chin and neck. Mark shared that sometimes he just gets really upset and frustrated and that he just shuts down. They discussed some solutions and it was agreed that he could ask to go get a pickle, a drink of water, or just a short walking break when he was beginning to get upset or frustrated. Mark agreed to try this plan.

This pickle intervention worked really well. From time-to-time, the intervention had to be tweaked a bit, however, Mark was safe and his behaviors began to improve.

Sometimes the craziest suggestions and most outrageous ideas actually work! 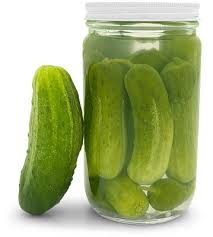 PD in My PJs